A new game has started! Join in by replying to @ChooseAdvGame on Twitter. 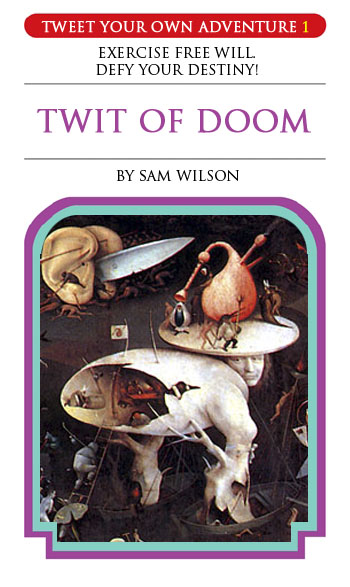 All decisions were made democratically.

TRANSCRIPT OF GAME ONE:

You find yourself standing in front of gates that some might describe as “pearly”. There’s a hippy-ish guy at a desk in front of them.

You approach the gates. "Name?" says Saint Peter, with the enthusiasm of a man who's had the same desk job for over two millennia.

To go into the gates, reply "SNEAK". To have a look in the desk's drawers, reply "PILFER".

Light shines from the drawer like in 'Raiders of the lost Ark". St. Peter returns with a DVD and a quill. "Would you sign- Hey! Stop thief!"

To talk your way out of it, reply "BLUSTER". To take the glowing object, reply "GRAB".

"I'm drawerholic, it's a curse, I was on celebrity rehab. Hey, 'Tooth Fairy' was a hoot, right?" you say. St. Peter's eyes narrow.

To offer free tickets to the premiere of "Fast and Furious 6", reply "BRIBE". To hit St. Peter while his guard is down, reply "VIOLENCE".

"I exist outside time," says St. Peter. "I already have that on BluRay." He slams the drawer, and opens the ledger to a page marked "Audit".

To submit to the audit, reply "WAIT". To cause a distraction, reply "FLAIL".

You kick the table over. St. Peter's spare halo falls out of the drawer and rolls out across the cloud floor. Alarm harps start strumming.

To body-slam the surprised St. Peter, reply "HULK". To grab the halo and run for it, reply "SCARPER".

Seraphim dive-bomb you as you leg it across the astral plane. You almost reach the Edge when the way is blocked by a black-robed boney dude.

To knee Death in the nuts, chose "ROSHAMBO". To dive into the void, reply "GERONIMO".

"I guard the Path betwixt Worlds. None shall pa - Hey!" says Death as you fly past, over the edge, and down towards normal Space and Time.

The halo comes to life, and pulls you back through the centuries. Buildings get shorter and the world gets muddier. You can't seem to steer.

To let go of the halo and re-enter the world, reply "I'M BACK". To hold on, reply "GRIM DETERMINATION".

After a while you unexpectedly slap into the beginning of time, rebound with a big bang and ricochet forward into a jungle swamp.

To search for the halo, reply "GLOOP". To swim for the shore, reply "FEAR OF LEECHES".

The players chose "FEAR OF LEECHES".

You haul yourself out on a vine. As you wring out your once-heavenly robe, a rustling comes from the bushes. Something lizardy is watching.

To run, reply "WHATEVER YOU DO DON'T RUN". To throw a rock at it, reply "THAT'LL JUST MAKE IT ANGRY".

The historically accurate velociraptor leaps out of the bush and attacks! It is covered in feathers and just over knee-high.

To pet it, reply "I SHALL CALL YOU POLLY". To kill and eat it, reply "DELICIOUS DINOSAUR DRUMSTICKS".

The players chose "I SHALL CALL YOU POLLY".

Polly bites the hem of your robe and won't let go. She drags behind you as you wander through the cretaceous. Time to move on, you feel.

To reclaim the halo, reply "LEECHES BE DAMNED". To signal the future, reply "MAKE WEIRD FOSSIL".

The players vote ended in a TIE.

Without a plan, you make a crude shelter of branches and sleep. You wake before dawn with Polly playfully biting your face. You are hungry.

To eat whatever you can find, reply "MMM BUGS AND SNAILS". To try and make a fire, reply "OH "PLEASE NO".

You eat something vaguely prawn-like. Long story short: Food poisoning. You reappear outside Heaven with Polly still biting your robe.

To return to Saint Peter, reply "BYGONES". To sneak around the back, reply "STAFF EXIT".

Some Seraphim are huddled outside the side exit of Heaven, having a smoke and debating an upcoming "big match" between Good, Evil and Man U.

To blend in with the angels, reply "MINGLE". To use Polly as a distraction, reply "OMG A VELOCIRAPTOR IN HEAVEN".

The Players chose "OMG A VELOCIRAPTOR IN HEAVEN".

To grab Polly and enter Heaven, reply "PLAYED FOR AND GOT!" To grab another fallen halo, reply "SCORE!"

Once again you grab a halo and run. "None shall pa- Hey! Seriously now!" says Death as you fly past again, and back towards reality.

To aim for the time and place where you died, reply "PLAYING ANGRY BIRDS WHILE DRIVING". To rewrite history, reply "REVISIONISM".

You crash-land on a painter in 1505. "That startled look on your face! It's sublime!" he tells his model, and quickly finishes the painting.

To befriend Leo, reply "LET'S TALK HELICOPTERS". To steal the new astonished Mona Lisa, reply "THE SURPRISE FOLLOWS YOU AROUND THE ROOM".

Leo has no trouble grasping your tales of the future. Inspired, he starts feverishly sketching clockwork iPads and Vitruvian Gagnam Style.

To stick around for the credit, reply "RENAISSANCE MAN". To use the halo to skip ahead a few years, reply "PROGRESS!"

To run and find Leonardo, reply "NEED EXPOSITION!". To fight, reply "NOT THE PEARLY GATES AGAIN".

The halo handily teleports you to Leo's jail cell. He explains that the corrupt Borgia popes have used his technology to conquer the world.

To fix this mess, reply "FIX THIS MESS". To fly off to the 50's and take credit for the Beatles' songs or something, reply "OR SOMETHING".

The players chose "FIX THIS MESS".

You and Leonardo teleport onto the control deck of one of the giant clockwork robots, tie up the crew and grab the controls.

Your robot's shoulder-mounted crossbow tears through the enemy. Behind them looms a wooden behemoth piloted by Gioffre Borgia himself!

To pound Borgia with arrows, reply "FULL AHEAD!" To use the halo, reply "SNEAK ATTACK!"

As you teleport onto the Behemoth, guards put swords to your throat. "My spies said you'd have one of these," Borgia says, taking the halo.

To throw out a defiant one-liner, reply "TAUNT". To beg for mercy and weep like a reality show contestant, reply "IT'S ALL LEO'S FAULT".

"I heard you liked men's rings!" you shout. "Innuendo!" Borgia isn't listening. He lifts the halo, forming a portal. Flaming angels fly out.

The Behemoth collapses and Angels fly out, igniting the world. "Oops," says Borgia, next to you in the rubble. "Didn't think that through."

To run back to Leonardo, reply "GIANT ROBOT". "To whistle for your pet velociraptor, reply "HERE POLLY."

Polly appears, pecking at the head of St. Peter. "Argh!" he says. "You've started Armageddon! You'll never get away with this, The Rock!"

To hold St. Peter hostage, reply "YOU'LL NEVER TAKE ME ALIVE". To interrogate him, reply "NICE WINGS, SHAME IF SOMETHING HAPPENED TO THEM".

The players chose "NICE WINGS, SHAME IF SOMETHING HAPPENED TO THEM".

"It's not my fault!" says St. Peter. "You corrupted history, and we have to reboot. It's a big job. Every single angel is is involved."

To convince St. Peter to save the world, reply "PECK, POLLY, PECK". To ask who's guarding heaven then, reply "HEIST".

The players chose HEIST and triggered the END SEQUENCE.

END SEQUENCE: You reappear at the gates of Heaven after stepping under the foot of a giant robot.

Other dead people are there too. Most of them are just milling around. "I REALLY should have thought this through," Borgia is saying.

You sneak in through the unguarded gates, and follow the signs saying "TO THE THRONE ROOM". You push open the doors...

,,,to see Leonardo Da Vinci has beaten you to it. He sits on the throne, tapping at the control panel.

"This is so inefficient!" he says. "It would make much more sense to have a system running on simple physical processes."

Before you can stop him, Leonardo presses a big red button. "Let's start from scratch," he says.

There's a Big Bang, and 14 billion years of history whoosh past. The throne room dissolves around you, and you are back in reality.

You return to your original life at the exact moment you left it: playing "Angry Birds: Star Wars" while driving on the freeway.

You pull over carefully, and get out. You're alive again. You look up at the stars, marveling at the beauty and absurdity of it all.

And a furious Polly, following you across time and space, shoots out of the stratosphere onto your head, killing you stone dead.

Thank you for playing!